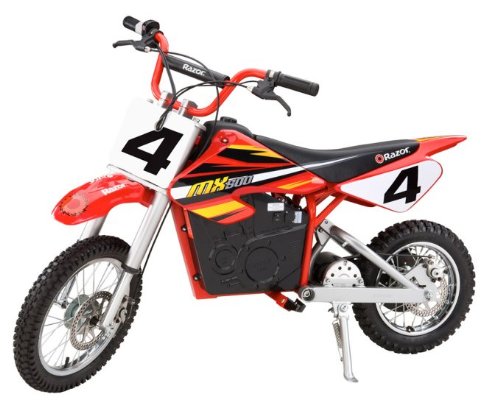 Has your teenager been asking for a dirt bike since ages but your budget doesn’t seem to cover one?

Enjoying a dirt bike experience is a dream that is cherished by most teenagers.

However, buying one is not always possible because of their exorbitant prices.

Before your lose hope of gifting your rebellious teen a dirt bike for Christmas, consider the Razor MX500 that will blow his mind with the incredible features it has to offer.

For every teen who wants to enjoy speeds of 17 miles per hour through bumpy dirt trails without worrying about running out of charge, the Razor Dirt Rocket is his best bet.

The Razor MX500 is a high performance electric motocross bike. Its scaled down design and tough build can carry a weight of 175 lbs. With knobby and large tires measuring around 16” and 14”, the bike is equipped to deal with dirt and maximum power transfer.

While being priced affordably, it does not compromise on its design. It is designed to look exactly like a dirt bike should. It features a chain driven motor that makes for quiet but powerful operation.

What your teen will love the most about this bike is the kind of adventurous rides it has to offer instead of restricting him to flat and boring pavements. To amplify your interest in the bike, here is a RazorMX500 review to help you choose better.

The website from where you buy the product will tell you that it is suitable for kids above 14 years of age but parents who have used the bike know better. As long as your kid has some bike riding experience, it can be a great source of adventure for an 8-12 year old. The bike can hold a weight of up to 175 lbs which means that kids up to 18 years of almost all shapes, sizes and structures can fit on to it comfortably.

Featuring a high-torque 500W electric motor, the Razor MX500 is just the bike that your teen needs to challenge speed limits in the neighborhood. It is driven by a 36-Volt battery system that is also rechargeable.

Your kid will not need to worry about stopping the ride mid-way because a single charge can take him up to 10 miles. It offers an average speed of 15mph and can go faster depending upon the weight and size of the rider. It is fast enough for your teenager and precisely as fast as you would want the safety limits to be.

Despite the fact that the bike is affordably priced, it has the exact frame of a dirt bike with a scaled down design that your kid is sure to be fascinated with.

The Razor MX500 features dual suspension and riser handlebars that offer a smooth and comfortable ride to your kid, irrespective of the terrain. This feature will be thoroughly loved by your kid since they will have their much-awaited adventures without your restrictions.

The bike is perfectly equipped to deal with dirt and rough terrains with knobby and large tires. It features 16” tires in the front and 14” rear tires to ensure that maximum power is transferred and the rider gets to experience a fun-filled yet safe ride.

Featuring a twist-grip throttle and dual disc brakes that are hand operated, the bike features a twist grip acceleration control for a powerful yet quiet operation.

The Razor MX500 is driven by a 36-volt fully rechargeable battery that simply takes 8 hours to recharge. Once recharged fully, it can run for 10 miles straight without needing a second round of charge.

What we did not like about the Razor MX500

Some users have reported that after the first three months of usage, the batteries were not getting fully charged and since the bike was out of warranty by then, it could not be replaced. The bike might need better batteries to sustain being fully charged.

To be more precise, assembly of the bike could be an issue initially if kids are planning to do it all by themselves. However, once they have a fair idea, they would not want you to help them at all.

The front fender of the bike is made of plastic that could easily break if it happens to fall from a height.

What makes the Razor MX500 stand out?

There are a number of reasons new and existing users would always love to come back to the Razor MX500. What makes it so popular and what advantages does it have over its competitors? Let us take a look.

Whenever we think of a dirt bike, all that comes to our mind is a rough and uneven terrain that will eventually lead to accidents. Dirt bikes are designed to be driven through such unfavorable terrains because that is where all the fun lies.

However, with the Razor MX500, you can be rest assured that you teenager is in safe hands. Its dual suspension makes for a smooth and clean ride regardless of the terrain. Even if he hits an uneven spot, he will not topple over.

The Razor dirt bike is an all-electric machine. Unlike other dirt bikes, there is no fume, gas or combustion and since it is run by three 12-volt batteries, the maximum that can happen is a battery leak that is not as harmful as other things could be.

This is yet another reassurance that could be linked to your child’s safety. When a dirt bike offers features like speed throttle, dual-disc handbrakes and adjustable handlebars, it is naturally more convenient and comfortable to ride.

If your kid has had some experience in bikes, he will easily pick up riding on it. This is not the same with other traditional dirt bikes that need thorough understanding of the machine and its mechanisms.

Unlike other electric bikes that run out of charge pretty quickly, the Razor MX500 covers up to 10 miles after being fully charged. Its rechargeable batteries take 8 hours to charge fully which is enough time to rest, eat and get back to having fun.

As opposed to traditional gas-powered motocross bikes, the Razor MX500 runs on a chain-driven motor that operates quietly while offering powerful operation. It also offers variable speeds to tackle rough and uneven terrains.

In comparison to other dirt bikes that could clearly burn a hole in your pocket, the Razor MX 500 price would surprise you. With the kind of features it offers, it is definitely worth buying.

If you would rather have your child playing outdoors than caught up in smart phones and video games, the Razor MX500 is your best bet.

It is also a great advantage that this dirt bike comes at a price that seems affordable and possible for most parents. The Razor MX500 cheap availability does not affect its qualities since the product undoubtedly leaves a mark.